Check out below my ski/coastal Cali road trip itinerary:

The first stop on the list was Mammoth Mountain. I spent a couple of days enjoying the slopes of this big bad hill. It was a ton of fun. Although I stayed at the base of the mountain, there was a free shuttle to downtown which boasted unique shopping, dining, and small-town feel.

Next was the drive up to Lake Tahoe. Along the way, a stop at Mono Lake is a must. It’s one of the oldest lakes in the western hemisphere and is 70 square miles in size.

Purchasing the EPIC ski pass to hit NorthStar, Heavenly and Kirkwood was the best bang for the buck. Starting off at Northstar California was a great intro to Tahoe. It snowed the entire day and provided some great deep turns.

Being in North Lake Tahoe, skiing Squaw Valley is a must. Squaw hosted the 1960 Winter Olympics and should be on every snow sports enthusiasts bucket list.

After skiing for a few days, it was time to head to the coast for the weekend. I spent a few days wandering around San Francisco. Checking out Pier 39 and the sea lions, doing the night tour of Alcatraz (the night tour is highly recommended as the added dusk feel offers the best creepy feeling as well as fantastic views of San Fran, eating at some of the best restaurants San Francisco has to offer (hello China Town) and dancing the nights away to the wonderful live music, was a great time spent.

After being in the city it was time to head back to the mountains – to South Lake Tahoe. Heavenly and Kirkwood Mountain was on the list. Heavenly is uniquely situated right on the California/Nevada border. The views of the lake are breathtaking from the top of the mountain. So if you are a gambler, it’s an easy walk down the road into Nevada to spend some time in the casino. If you’re like me, I decided to eat at the Fire and Ice Grill & Bar and watch the chef’s toss-up custom meals.

After Heavenly, I stayed at the base of Kirkwood Mountain, which was my favorite mountain of the trip. The terrain was great and varied, providing a little bit for everyone. I was there mid-week and had the mountain to myself. The staff was super friendly and the little pub had great food, a toasty fireplace and drink specials that couldn’t be beat.

Kirkwood was the final mountain stop of the trip. After that, I was coast bound. Highway 1 was calling my name. I headed for the coast and decided on a stopover in Santa Cruz. I was so happy for the stopover too. The pier was great (and it started a bit of a pier obsession that I now have), the shops and restaurants were quaint and everyone seemed to breathe and love Santa Cruz. I visited the first surfing museum and witnessed some of the best waves to date. It also happened to be the 40th anniversary of Santa Cruz Skateboards, so a stop at their shop was a must.

After walking all over Santa Cruz it was time to do the drive. The coastal highway 1 is an absolute must-do! The coastal waters were gorgeous. There were also sightings of sea lions, elephant seals, and wild Zebras as well! I kept my eye’s peeled for a whale sighting and even stopped for lunches and dinners at restaurants on the coast but didn’t spot any.

One of my favorite stops along the coast was Pfeiffer Big Sur State Park. The purple sand was so unique and the waters were amazing. It’s a tough spot to find as the turnoff isn’t marked. But it’s well worth the time to scope it out.

After a big long drive, the next stop was Santa Monica. I continued my love affair with piers and headed out there as my first stop. Being in the bustling city was a nice change. The warm weather and nightlife were exactly what was needed.

For more on sightseeing in California, check out our article on RVing California’s National Parks. 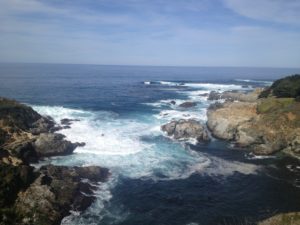 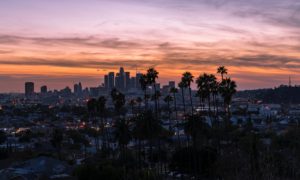 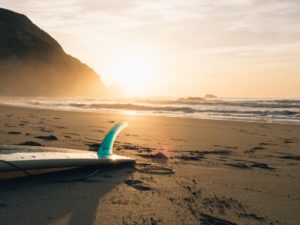